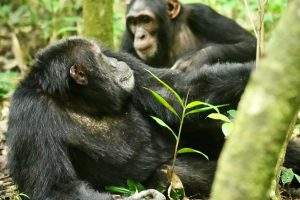 Although Uganda primate safaris not as that plentiful as that of its neighbors, Kenya and Tanzania, Uganda’s wildlife is in remarkably good shapes, particularly in view of the country’s many years of civil strife in the 60s, 70’s, and 80’s and UN rest, when poaching was uncontrolled. And, as far as diversity goes, Uganda may have the edge of over its   neighboring countries .Its marvelous rain forests protect a wealthy of wildlife, including an astonishing number of primate species found in few other places for Uganda primate safaris .

Where to go for Uganda primate safari in the National Parks

It is Uganda primate safari, in fact, that many visitors come to see. In the south west of the country are two of only four national parks in the world –mgahinga Gorilla and Bwindi impenetrable National parks – where you can see the endangered mountain gorilla.

But no one said it will be easy: permits to go gorilla tracking are on high demand, hard to come by, and, once you do get them, there‘s no guarantee you will even see the few gorillas there are in those parks. But if you should be one of the lucky few, you’ll know that the trouble was well worth it (see Uganda’s Mountain Gorillas).

Uganda is also one of the top places in the world for chimpanzee, more closely related to humans than to many other apes. One of the best places in the country to see this primate is in Kibale Forest National park, but they may be seen in the Budongo Forests and the kyambura River George in Queen Elizabeth National park, where they can be seen more easily.

Other primates on the Uganda primate safari

All the monkeys found in the country belong to the family cercopithecidae. They include the yellow baboon, with its dog-like head; the savanna-dwelling pats the monkey;  four races of the vervet monkey ; the blue monkey , four races of the vervet monkey ,  common in most of Uganda’s  forest;  the red –tailed monkey, also afforest-dweller; the extremely localized de Brazza’s monkey; L’Hoest’s monkey, most likely to be seen in Kibale Forest National Park ; Wolf’s guenon, a race of the mono monkey; the owl –faced monkey ;  the owl – faced monkey  or  Hamlyn’s guenon; the grey- cheeked mangabey, also common in Kibale forest; the wide spread and often seen black- and white- colobus ; and two races of red colobus. Other primates are the wideyed greater bush baby and its smaller relatives, the last bush baby – more often heard than seen… Enjoy your primate safari in Uganda